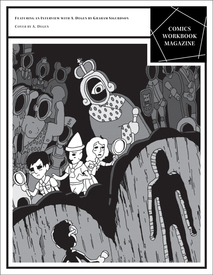 An excerpt from 73 Notes sur la bande dessinée (73 Notes on Comics)by Barthélémy Schwartz Translated by Andrew White. The full translated text of 73 Notes on Comics will be published in Comics Workbook Magazine #4. There are three types of games to be played with images. These three types of games define by themselves the art of images in each of its particular forms, be it painting, cinema, or comics. We will see that in extending this notion of the image to that of territory, we can outline the relationship that comics might have with sculpture. There will be sculptures that are comics. The lack of a specific name to call comics will thus appear in its grotesque splendor; its very name is an obstacle to its development (it is even an obstacle for the French language; the words fumetti or comix do not in any way imply that a comic is indeed a bande dessinée, a drawn strip).A single image, invested or non-invested, defines painting, as well as all other particular forms that the single image can take in art. The history of painting unfolds as a prism that moves from an invested to a non-invested image (the unpainted canvas exhibited and signed as a painting).

An image composed of multiple images seen simultaneously defines cinema. Just as for painting, it is not necessary that this image be made up of invested images for it to be cinema. A Robert Bresson film is cinema, as is a film composed only of white or black images. One could make a film composed entirely of blue or green images. That would be cinema.

So, three types of images define three genres: painting, cinema, and comics. When a painter makes a comic the subject of his painting, he is still making a painting. When he works to speak the language of comics, regardless of the techniques he uses, he is making comics. Andy Warhol made comics, but Roy Lichtenstein only made paintings.

It is not the specific content of juxtaposed images that defines comics, but the juxtaposition of the images itself. The text/image dialectic is only secondary in comics; a global image composed of juxtaposed local images without text would still be comics.